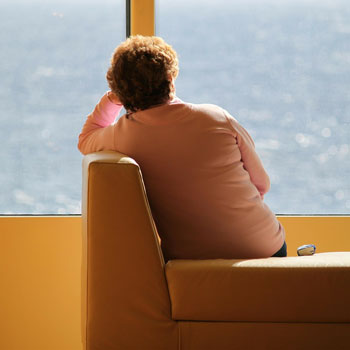 It’s normal to experience things like sadness, disappointment, exhaustion, or grief. Most people will notice that their mood goes through occasional ups-and-downs in response to everyday challenges. This is just part of being human.

But, Depression is something VERY different and can have a devastating impact on your life.

Depression can seriously impact the way you think and feel as well as the way you interact with others and how you go about living your life. It is unlikely that you are going to “snap out of” depression.

If left untreated, it can become a chronic problem that you are left dealing with for the rest of your life.

YOU ARE NOT ALONE IN YOUR DEPRESSION

Depression can make you feel like you are all alone in your suffering - but thankfully, you are not alone.

You may have found that when you are depressed, it is hard to talk to others about the difficult thoughts and feelings you are having. But there are some things you need to know about living with depression.

It’s so important to understand that depression is very treatable in a number of different ways. The earlier the treatment begins, the more effective it can be.

Sometimes you will experience days where your mood lightens or you are able to enjoy your normal pursuits. Unfortunately, these days are probably not very frequent if your Depression is left untreated.

Someone who is experiencing depression may also see a range of additional symptoms, including:

In children, depression can also present itself as significant irritability and difficulty gaining weight. The irritability can actually be more prominent than the low mood. A high level of anxiety might also be apparent.

Depression can be a single episode or recurring. It is frequently interrelated with anxiety, stress, and medical conditions such as diabetes, cancer, and heart disease. Depression can make these worse, and vice versa.

THE TOLL OF DEPRESSION ON YOUR LIFE

Depression doesn’t just rob you of the ability to pursue your passions. It also limits your ability to be fully connected with the important people in your life. It can impact how you participate in normal self-care routines. It can even take away your freedom to think and feel the usual range of emotions.

It can even feel like depression takes away your ability to fight back and regain a sense of control over your life.

Whether you are an adult, teen, or child living with depression, it can seem as if you have no energy left in you to fight. Even worse, it can feel as if there is no point in trying. You might find yourself thinking that even if there is help out there, it won’t be able to help YOU. Depression can rob you of your will to do anything about being depressed.

The thing is - none of what depression tells you or makes you feel is true. Now more than ever, there are effective treatments available.

The first step to fighting back is to understand what is really going on in your brain and body.

THE CAUSES OF DEPRESSION

For decades, television and print advertising were incessantly beating the drum that depression was the result of a “chemical imbalance.” There had also been the belief that depression was “anger turned inward.” Overwhelmingly, researchers have shown these theories to be baseless, but still, they linger on in our culture.

Thankfully, these days we have a better understanding of the actual roots of depression.

The most up-to-date research on depression strongly suggests there is no one particular cause. It can result from the interactions of genetic, biological, environmental, psychological, social, and lifestyle factors.

Like most mental health concerns, there is no blood test for depression. It is assessed by carefully evaluating a person’s thoughts, emotions, behaviors, physical experiences, and environment.

Certain factors can increase someone’s likelihood of feeling depressed, some include:

The most common treatments for depression are therapy and medication. Research has shown that a combination of these two approaches is more likely to be effective than doing one or the other alone.

While research has shown that therapy and medication are about equally effective as a short-term treatment for depression….there are very notable differences between the two approaches.

There are occasions when someone does not respond favorably to any of the available therapies or medications for depression. In these instances, brain stimulation treatments are used as a last resort.

MY TREATMENT APPROACH FOR DEPRESSION

One of the most effective treatments for depression is known as Cognitive Behavioral Therapy (or CBT). This type of therapy focuses on helping you learn how to approach your thoughts and actions in different and healthier ways. Through developing a variety of skills and coping strategies, you’ll be able to rediscover the joy in your life.

In a safe and non-judgmental environment, we will discuss your experiences and struggles with depression. We’ll also collaborate on steps you can take to increase your activity level, nurture and take better care of yourself, reconnect with the important people in your life, and change what you do when depression threatens to take hold of you again.

You will become armed with powerful techniques and develop the ability to defeat depression through the actions you take.

You may decide that you are interested in discontinuing your depression medication for a range of reasons, things like side effects, disappointment that it isn’t working as well as you hoped, pregnancy, concerns about future health problems, etc. If this is the case you would start by discussing your choice with the doctor prescribing your medication. You will then develop a plan for weaning off the medication safely. It is not recommended that you abruptly quit this type of medication on your own. This should only be done under a doctor’s supervision.

Whether you do or don’t take medication as part of your treatment for depression, your decision will be understood and supported. Keep in mind, you do not necessarily have to stop medication in order to get the most out of therapy. Many people employ both methods at the same time in order to maximize their likelihood of feeling better long term.

The winter can be a particularly difficult time for many people. For one, there’s less available sunlight, which has an effect on both mental and physical health. Even if you are a winter sports enthusiast, it is harder to stay outside for long due to the cold temperatures.

Seeing friends and family can be more difficult during this time of year because of sometimes volatile weather. Many activities you engage in during the warmer months become trickier in the winter months.

There are people who find that their mood gets worse during the winter and then lifts on its own during the spring or summer. If this is a pattern you experience year after year, it might be a case of Seasonal Affective Disorder (SAD).

SAD begins in the late fall for a small percentage of people. Even though it has its own name, it is not considered a separate diagnosis from Major Depression. That said, many of the same treatment are effective in treating SAD. There are even therapies that are specific for the winter blues.

Maybe you’ve tried getting to the gym more often to help improve your mood. While becoming active is definitely a good step towards battling depression, it might not be enough on its own.

For many, developing other skills and strategies for coping with depression may be the missing piece that has kept them from achieving success. Some of the techniques that can help improve outcomes include:

A condition known as Dysthymia or Dysthymic Disorder is a lower-intensity type of depression that has continued for at least 2 years. It can also be known as Persistent Depressive Disorder. If you are living with Dysthymia you may still experience episodes of Major Depression. However, when the Major Depression subsides, the individual returns to feeling Dysthymic...that low-level feeling of melancholy or sadness.

Many of the same skills, strategies, and techniques that work for Major Depression can also work for Dysthymia. Even though it’s lasted for a long time, you can still begin to feel better once you receive effective treatment.

A FINAL WORD ON DEPRESSION

Depression can make you feel hopeless and believe that nothing you do will be able to make your life better. The truth about depression is that there are skills, strategies, and techniques that can help. We can work together towards reclaiming your life and finding the satisfaction you deserve.